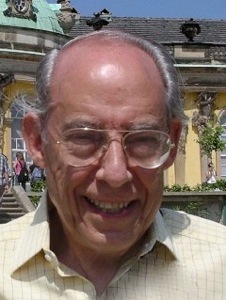 As an art student in school and college my work reflected my admiration of American realists Edward Hopper and Thomas Hart Benton. But over the years abstract expressionism, op art, minimalism and color field painting had a strong impact on me and my work evolved into abstract acrylics often incorporating aluminum, brass and copper on a canvas or board support.

The technique—I call it organic, multi-tonal color field painting—is expressed in two series: Spheres of Influence and my latest series that I call, Just So. Concurrently I have pursued another technique that I call painterly constructions, work that combines painting and sculptural techniques. Series in this mode in acrylic, metal, board and paper include Critical Points, Crunch Time and Within the Realm.

In the Just So and Spheres of Influence series, curvilinear forms slip past each other, overlap, barely touch or collide, creating movement, tension and mystery. Critical Points suggest sharp, disconnected messages tangling in a variety of environments in a struggle to gain center stage and prevail. Crunch Time expands the collision of ideas concept with a roiling mass of aluminum, brass and copper. Within the Realm suggests agitation and a massive turbulence below the surface. The Cosmic Order sculptures explore these themes in three dimensions. The titles of most of the series are drawn from cliches and bureaucratic jargon and suggest, in concert with my aesthetic vocabulary, a range of emotions and reactions I experienced in the workplace, which, no doubt, are applicable to many, anywhere.

On retirement I returned to art full time after a career in journalism—two New England newspapers and 10 years with LIFE Magazine; and public relations—IBM, Ford, Union Pacific and The Business Roundtable, heading PR at the last two and International PR at Ford.

Since 2000, when my work was first shown at Ruth and the late Skitch Henderson’s Silo Gallery in New Milford, Connecticut, another show followed at the Silo in 2003, and the Jain Marunouchi Gallery in New York in 2006, 2009 and 2012. Other shows include the Artitude Gallery in Paris in 2008 and 2009, and art fairs in San Francisco, Shanghai and Hong Kong in 2012 and 2014. Collectors in California, Connecticut, Delaware, Michigan, New York, Tokyo and Warsaw have acquired my work. My focus today is on-line.

Please direct all inquiries, and requests for pricing information to:

Thanks for your message! We’ll be in touch soon.