Media coverage of my work includes Connecticut Public Television and articles in several New England newspapers (my studio was formerly in Connecticut). One article that best captures the spirit of my work follows:

After all the years he spent massaging corporate messages, punching up speeches and parsing phrases, Dick Anthony can afford to be a little glib with titles.

The Roxbury artist, whose work will be on display at the Silo Gallery in New Milford, from Sept. 13 through Oct. 19, used business buzzwords as the inspiration and titles of his latest work. Titles like “Crunch Time,” “Critical Points” and “Spheres of Influence” are not only wry residuals from Anthony’s days in corporate public relations, but they capture the spirit of Anthony’s work perfectly.

Anthony’s abstractions, both in paint and mixed media, might easily be translated as the sort of tangles, swirling, circuitous culture endemic in corporate America, although Anthony dismisses the idea, saying his conceptions are not that literal.

With or without the marketing lexicon, Anthony’s works, from his highly textured organic orbs to his swirling spirals of slender metal are wonderful testaments to the power of balance and form. Clearly enraptured by curvilinear forms, Anthony has created a vocabulary of such arched and bowed shapes, locking them together and spreading them apart to create a cosmos rich in the power of the curved line.

It’s a strange sort of evolution for Anthony, a tall, fit, bespectacled man, dressed this late summer afternoon in an oxford shirt, khaki shorts and Topsiders. His immaculate contemporary home sits on a copse whose generous windows overlook a lush, sloping meadow. A fieldstone fireplace separates a living and dining area anointed with colorful, whimsical art and modernist furniture of clean lines and fanciful contortions. An Alexander Calder work sits above two abstract landscapes by Carol Summers. Indian-inspired sculptures grace his buffet and a couple of painted wood giraffes look toward the outdoor pool and garden where wild turkey have been known to flourish. Anthony has lived here since 1997, four years after he retired from the Business Roundtable.

For years, the New Milford native eschewed the art bug that had bitten him as early as the third grade, thinking it would be impossible to sustain himself as an artist.

“I just didn’t have the guts to go out and try to cut it as an artist,” he said.

After a decade in journalism and two more in public relations for Fortune 500 companies, Anthony returned to his first love, painting.

“I was doing this realistic stuff and I thought, I’ve got some idea of my own vocabulary I’d like to use,” said Anthony, settling into a modernist chair in his airy, Santa-Fe-inspired living room.

Initially, Anthony’s forays in paintings looked very like the brightly hued minimalist abstractions that dot his contemporary home. Architecturally inspired, the works were rectilinear abstractions painted in vivid colors. But the works seemed forced, he said, and were perhaps too cerebral. Still, he was captivated by a curl in a line he had painted. So captivated, that he began to explore the curve, not only in paint, but in metal and paper.

“That was the trigger,” Anthony said.

“I felt I was over intellectualizing it. If you can free it up and let it happen and take advantage of the serendipity of it, you just turn that on. The Japanese had an appreciation for (centuries of) the serendipity of unplanned artistic achievements,” he said.

“That’s what I try to take advantage of.”

It’s ironic that what inspired Anthony’s current obsession with cylindrical forms was a roll of aluminum usually used for flashing on chimneys. It was just pliant enough to use as the central feature in Anthony’s art. The result is a series of collages in which shapes connect and intersect, stray and affix in a series of whorls that create a kinetic symphony of shapes.

“Spherical forms in the paintings slip past each other, overlap, barely touch or collide creating a tension and movement that suggest power, mystery and influence,” he said.

His series “Spheres of Influence” is more painterly, with metallic shapes serving as the interspace between two large, highly textured tonalist orbs.

It is easy to see these as planets sliding past one another in a slow orbit, or creatures who almost, but don’t quite, connect.

Anthony, whose work will be on display with ceramist Pat Shoenfeld at the Silo has exhibited at the New Milford Gallery once before, in 2000. He hopes to enlarge what he calls his “painterly constructions” creating more elaborately controlled and structured works in this, his third career. 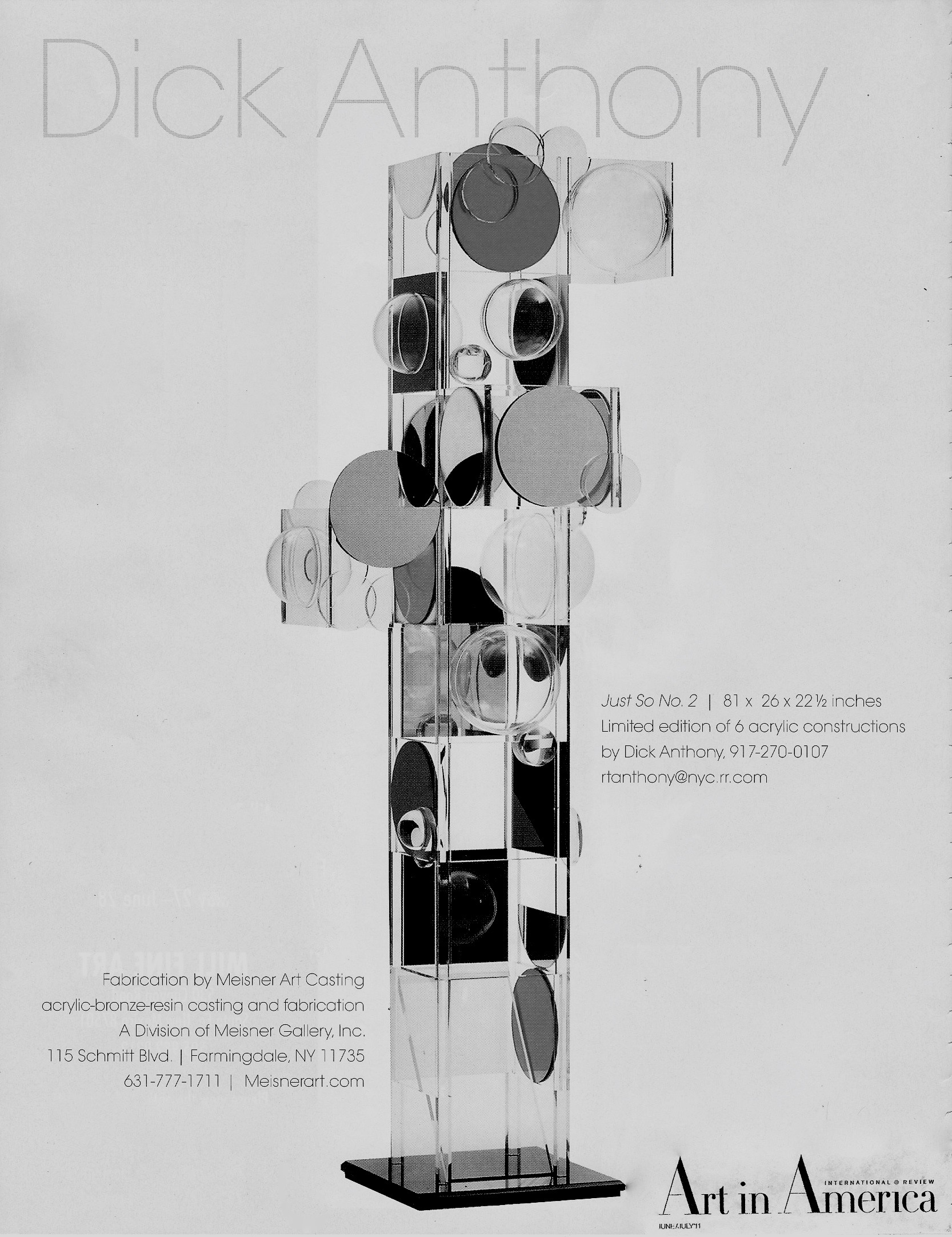 Art in America ad by The Meisner Gallery of the 6.75-foot sculpture shown in the Cosmic Order Gallery